Ever want to do death-defying stunts such as car crashes and motor tricks but in the safest way possible? If that’s the case, there is a mobile game that allows you to perform deadly stunts and enjoy the chaos and mayhem that ensues—Ragdoll Dismounting.

Ragdoll Dismounting is a physics-based mobile game developed by Abigames where you get to control a ragdoll in the form of a stickman. You get to perform different deadly stunts and cause as much damage to the ragdoll as possible to earn points. Each level has unique challenges and you get to do all of that with props and vehicles.

You might think controlling a ragdoll is easy but there are difficulties in playing the game. Don’t worry as you have all the information that you need in this guide. Check out how you can play the game, learn how to get coins, some tips, and tricks, and more down below.

Time it Right to Throw the Ragdoll

The goal in playing Ragdoll Dismounting is to simply throw the stickman as far away as possible and do the most damage. The mechanics are rather simple yet the execution remains one of the most challenging on mobile.

Remember, timing is key to throwing the ragdoll.

While force is key to dealing more damage to your ragdoll, there are also other factors that you need to consider so you can launch your ragdoll with even more force. One such factor is the ragdoll’s pose.

There are a lot of poses available in the game and each one will affect how the ragdoll will be thrown. The best piece of advice that anyone can give to you is to try all the poses and see which ones have the best trajectory.

Each pose will have a different impact on the ragdoll and with the force that you exert, you can deal even more damage.

Learn How to Get Coins

Apart from performing the perfect stunts, there are many other things that you can do in this game. One of which is collecting coins. In this game, it is important to know how to get coins.

Coins are useful resources in Ragdoll Dismounting. These are often used to purchase different items that will help you in the game. One of the best ways to get coins in this game is to simply play it but you need to play it efficiently and effectively.

Throw your ragdoll as hard as possible so it receives more damage. The more damage you deal with your ragdoll, the higher your points. At the end of each round, the game will then sum up your entire score and you will earn coins that correspond to how well you did in the game.

This is the reason why you need to learn different techniques to throw your ragdoll harder and farther so you will receive more coins in the end.

Use Those Coins to Purchase New Vehicles

Once you’ve received enough coins, it is best that you put them all to good use instead of purchasing useless items. One of the most important items that you can buy in Ragdoll Dismounting is vehicles. Always invest in different types of vehicles.

Each vehicle has a unique effect on your ragdoll that causes it to receive even more damage. You can unlock the first few vehicles in the game using your coins.

The more you invest in different vehicles, the more you get to deal damage to your ragdoll hence you also earn even more coins in the process. There are certain levels in the game that require you to use a particular vehicle so make good use of it.

You will notice that every time you finish a level, the game gets progressively more difficult with different terrains to make it more challenging. Each level is unique from the previous ones so you’ll always have to think about how you can beat each one.

There are a few levels that you can try before you proceed to the more difficult ones. After that, certain levels will need to be purchased through the use of coins.

There are other ways to unlock new levels for free and that is to watch video ads. There is an option to watch an ad at the right corner of the screen which will unlock a few more levels for you to play.

Take advantage of this feature so you can earn more coins by playing.

Use Your Coins to Unlock Even More Levels

Collecting coins in Ragdoll Dismounting is rather easy. There are no hidden secrets as to how you can earn them. Now that you have collected coins, it is time that use them to unlock new levels so you can earn even more coins and face new challenges.

These levels are quite difficult and they will take even more time for you to finish, but this only means that you’ll have more time to play the game.

Each level that you unlock has unique challenges so you will need to strategize your every move. Remember not to spend your coins on everything you see at the in-game store but focus on collecting those coins to unlock more levels.

Invest in Props to Increase the Damage

There are a lot of things that can be purchased using your coins. As mentioned, important items like vehicles should be your priority.

However, there are also props that you can unlock using your coins. But be aware, they are not as useful on each level. Props can be used within the level to add more damage to your ragdoll.

Be sure to invest in props that you can use immediately. The point of each prop is to deal extra damage so you get a higher score.

Invest in ramps, explosives, and pointy objects as these are the most common props that you can use instantly.

Take Advantage of Ads to Boost Your Rewards

You should notice at the end of each level that the game also gives out certain rewards. This usually happens when you reach a certain point threshold in the game.

Whenever you achieve such a feat, you are rewarded with random items and props that will further help you in the game. There is one secret that many players don’t know about yet.

Take advantage of ads to boost your rewards. Watch a 30-second ad and then head back to the main menu to claim your rewards. You’ll notice that there are now even more rewards to collect.

Ragdoll Dismounting is a mobile game that uses a stickman or ragdoll to perform different stunts. You can throw the ragdoll at a wall or push it down a flight of stairs. You can even sling the ragdoll far away.

These are just some of the many stunts that can be done within the game. Each one can be fatal if you try to do it in real life. Never attempt these stunts in real life.

You might think that by doing it in real life, you can emulate it in the game but this is very dangerous.

The game also provides a lot of reminders to never do these stunts. Be sure to follow the advice and be safe.

Now that you know the best ways to play this game, it is time to put your skills to the test. Download the game today from the Apple App Store.

To download, search for the title of the game and tap Install. This should initiate the download procedure followed by the installation process.

Wait until the game is fully installed before tapping Open to launch the game and start playing.

Ragdoll Dismounting is a fun and unique mobile game that requires certain creativity and imagination to pull off some amazing stunts. Remember to follow the tips and tricks mentioned above so you can get more coins to purchase items in the game. 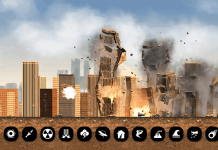